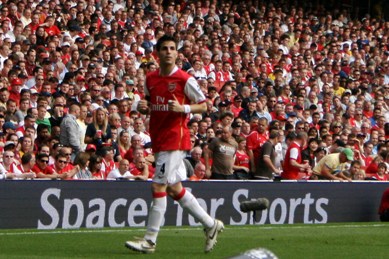 It is believed that Gunners skipper could be out for atleasr three weeks after being subbed at half-time in the 4-1 thrashing of Portsmouth.

Arsenal manager Arsene Wenger said that Fabregas who is unlikely to make Wednesday’s Champions League qualifier against Celtic will undergo a fitness test today to assess the extent of the injury.

Wenger told reporters that Fabregas has got a hamstring problem and he will not make it for the match on Wednesday.

Wenger also said that if it is a little pull then Fabregas will be out for at least three weeks and if it is just a tightness maybe he can get away for the Celtic game but after 48 hours the club will have a better view.

It will be a massive blow for the Gunners as the Spanish midfielder has been in top form this season.

He was a doubt before the 2-0 win at Celtic at Parkhead with the same hamstring niggle but played the whole game.

But the problem got worse in the Pompey clash and it seems the Spanish ace could now be out until September.