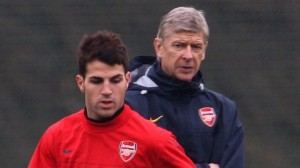 Wenger took charge of the Gunners on September 28, 1996 and has since gone on to win three Premier League titles and four FA Cups during his 4,749 days at the helm.

Fabregas, Arsenal’s current captain, was signed by Wenger as a 16-year-old from Barcelona’s youth team and he has now gone on to be one of the most valuable players in world football during his time at the Emirates Stadium.

Fabregas in paying tribute to Wenger declared that the manager has been the most important influence in his short career.

The Spain international midfielder said that Wenger was the one brought him to Arsenal, and made him train with the first-team when he was only 16 years old.

Fabregas added that he trained alongside Thierry Henry, Dennis Bergkamp and Patrick Vieira and that he was lucky to learn from the big players.

The midfielder also added that it was a very big step forward him and that the manager took the risk to put him in the team.

Fabregas also said that he has to thank Arsene Wenger for that and he will now have to pay Wenger back for what he has done for him.