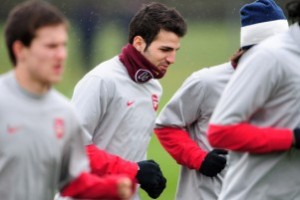 Arsenal skipper Cesc Fabregas is set to give the club a major boost with a return to action this Sunday.

The Spanish international midfielder has missed the past two matches for the Gunners but returned to full training earlier this week and looks set to face West Ham on Sunday.

Arsenal basically need to keep winning to keep in touch with Manchester United and Chelsea so having one of the most influential midfielders in the English game back in the starting line-up is perfect for manager Arsene Wenger who will have Alex Song available after suspension and Tomas Rosicky returning, giving him plenty of options in midfield.


AC Milan Announce David Beckham Will Be Out For Six Months