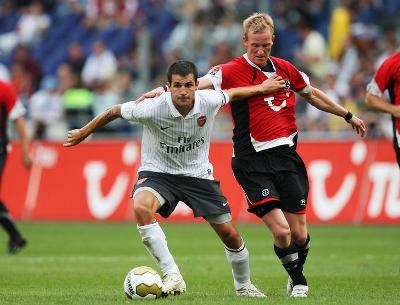 Arsenal manager Arsene Wenger has revealed that captain Cesc Fabregas will miss their Champions League playoff second leg tie at home to Celtic on Wednesday due to injury.

The 22-year-old Spanish international midfielder, who excelled in the 2-0 first-leg win at Celtic Park on August 18, suffered a hamstring injury in the Premier League game against Portsmouth on Saturday.

Wenger was quoted as saying on the official Arsenal website that Fabregas’s scan was quite reassuring as he has no muscular strain, however it will take a few days to settle down.

It is also said that Fabregas will miss the Premier League clash with champions Manchester United at Old Trafford on Saturday, though Wenger remained optimistic he could play a part.

The winners of the Champions League playoff tie will go through to the lucrative group stage.