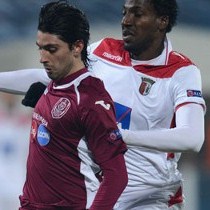 The Portuguese striker ended the qualifying hopes of his countrymen during a scintillating opening first half in which the beleaguered visitors also had Douglao sent off.

Rui Pedro had his treble within 33 minutes and, while Alan had pulled a goal back after 17 minutes, Cluj were in full control by the break once Douglao saw red in added time.

While Cluj failed to add to their tally, victory ensured they moved level with Galatasaray, who beat already-qualified Manchester United 1-0 in Istanbul, with a game remaining in Group H.