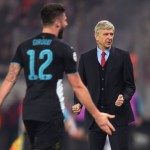 Can Arsenal evoke the spirit of Liverpool and Istanbul?

The last English side who needed to claim a two-goal margin of victory to progress to the last 16 against Olympiacos was Liverpool back in 2004.

The Reds conceded in the first half at Anfield and were left needing three after the break to stay in the competition.

Against the odds, the Merseysiders pulled it off and began a magical journey to the final in Istanbul where they stunned AC Milan to lift the trophy.

This Arsenal side has more talent than that Liverpool one – but perhaps not the belief or ability to grind out a backs-to-the-wall result on their travels.

Wenger’s men could yet face a European heavyweight amongst the group winners in the last 16, but this sort of turnaround can instil a winning mentality within a team that can propel them towards glory.

The Gunners still have a host of players to come back from injury and will certainly be one for the big boys to avoid when the draw takes place in Nyon.