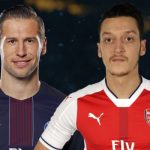 Paris were 11 matches unbeaten (French Super Cup included) before going down 3-1 away to Monaco on 28 August. It meant that, for the first time in 16 months, PSG did not have at least a share of the Ligue 1 lead.

Defender Layvin Kurzawa has scored four goals already this season: one in the Super Cup, two in Ligue 1 and his first for France in the 3-1 friendly win against Italy in Bari on 1 September.

Arsenal had more players in the France squad for Euro 2016 than their Paris opponents, with Olivier Giroud and Laurent Koscielny both featuring. PSG’s Blaise Matuidi featured in every game as the hosts finished runners-up.

Arsenal have qualified for the Champions League for the 19th consecutive season, with only Real Madrid boasting a longer current streak of 20.