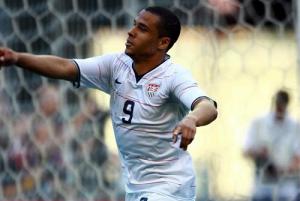 Sochaux striker Charlie Davies has revealed that he believes the USA can win the World Cup in South Africa next year.

The American international striker says that the team’s brilliant performance in reaching the final of the Confederations Cup in June holds them in good stead for a tilt at the winning the biggest sporting event in the world.

The 23 year old striker told reporters that he thinks that the United States showed that they have the potential to really make an impact at the World Cup.

He added that if the players are all playing well and with the players United States have, there is no reason why they could not win the World Cup.

He also said that the United States have what it takes as they have beaten Spain and went toe to toe against Brazil.

The striker also said that if the team plays they way they did against Spain there is no reason why the team could not make a big impact in the World Cup.

Arsenal Linked With A Move For Sochaux Midfielder Marvin Martin