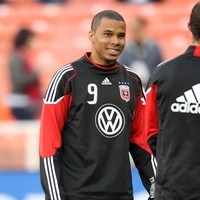 Charlie Davies was visibly emotional after completing a successful return to competitive football with DC United on Saturday.

The 23-year old, who is on loan from French club Sochaux, was involved in a serious car accident about 18 months ago, sustaining terrible injuries and it was unsure whether or not he would ever play again.

But the USA international returned to the fray, coming on in the 52nd minute of the RFK Stadium clash with Columbus Crew in the opening weekend of the 2011 MLS season and scored a brace in his comeback match.

After the match, Davies was wiping away tears as he spoke to CSN Washington about his return to the game after such an uncertain and difficult time.