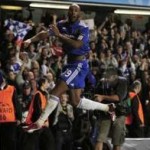 Chelsea got their Champions League campaign off to a winning start with a 1-0 win over Porto at Stamford Bridge.

Nicolas Anelka’s strike at the start of the second half handed the Blues three points at the first time of asking in Group D, as Carlo Ancelotti’s first European game in charge of the Premier League side ended in success.