Demba Ba’s late goal saw Chelsea through to the Champions League semi-finals with a 2-0 win over PSG, as a 3-3 aggregate draw gave the Premier League side victory on away goals. 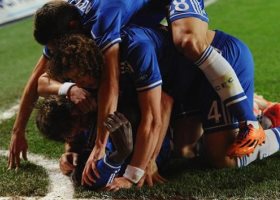 Chelsea started slowly as both sides considered their approach, with PSG bringing a 3-1 lead into the match. PSG sat back, and Chelsea tried to encourage them forward in order to launch counter attacks.

Frank Lampard almost scored on 28 minutes, when a fiercely hit free kick from the wing deflected off the wall and Salvatore Sirigu dived right to save. Four minutes later, Chelsea had the lead when David Luiz flicked on a corner and an unmarked Andre Schuerrle slotted in a low shot.

In the second half, Chelsea almost had two when Willian squared a pass for Schuerrle to strike against the crossbar. A minute later it was Oscar’s turn when his free kick hit the bar. Edinson Cavani had two chances for PSG but put them both over.

With three minutes left, Demba Ba won the match with a dramatic late winner, staying onside and scooping Cesar Azpilicueta’s shot over Sirigu. Jose Mourinho celebrated with a trademark touchline run, as he moved into the semis for a fifth consecutive season.