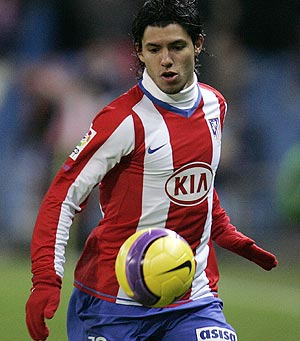 Sensational news are out and it has been reported that Premier League club Chelsea FC have only 24 hours to meet Sergio Aguero’s £50million get-out clause at Atletico Madrid.

It is reported that the Argentinian international striker is set to face Panathinaikos in tomorrow’s Champions League qualifier unless the Blues increase their £42m bid.

If Aguero plays, he will be cup-tied for Chelsea’s own European campaign this season scuppering the deal.

Atletico insist they do not want to let the striker go as the Spanish club fear a backlash from their fans if they sell Aguero, now age 21, so close to the start of the season.

Missing out on another major summer target would be a huge blow for Chelsea manager Carlo Ancelotti as he was earlier pipped by Real Madrid in the race to sign Kaka and the Blues’ bid to land Bayern Munich ace Franck Ribery has also hit the buffers.