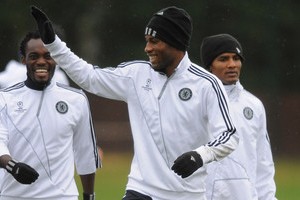 Chelsea are expected to fine Didier Drogba for his Champions League dismissal this week.

Local newspapers have reported that Chelsea are preparing to punish the Ivory Coast striker for his latest indiscipline, although the sum would be nowhere near the two weeks’ wages normally levied on players who have committed off-field indiscretions.

It is believed that Chelsea are determined to improve their players’ behaviour on and off the pitch and have introduced a system of fines to help them to achieve their objective.

It is understood that Michael Ballack was fined £10,000 after he was sent off for kicking out at Carlos Tévez in the 4-2 defeat by Manchester City last month, and Drogba’s punishment would be of a similar magnitude.

Agent : Balotelli Did Walk Out On Inter Milan Training