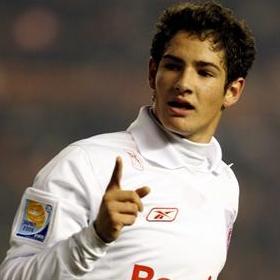 Premier League giants Chelsea FC are set sign AC Milan wonder kid Alexandre Pato for a British transfer record of £45m and then loan him back to the Serie A club for the 2009-10 season.

Chelsea manager Carlo Ancelotti, who signed the Brazilian international for AC Milan in 2007, is believed to be desperate to bring the highly-rated striker to Stamford Bridge and has went all out to get his man.

Having already lost Kaka to Real Madrid this summer, AC Milan is not eager not to lose another star player in the same transfer window and Chelsea will have come up with this astonishing deal to get around the problem.

A Stamford Bridge source revealed that Ancelotti is so keen to capture Pato that he will pay a club record fee and still allow Pato to stay at AC Milan for another season.

The source also added that Pato would come to Chelsea right now but Milan have just sold Kaka and do not want to lose another top star and that is why this deal could make all the difference. Milan get their money up front and keep his services for one more season and have plenty of time to scout a replacement.

It was also said that Chelsea are hoping it is the perfect deal both for them and for Milan.

The 19-year-old, former Internacional player scored 18 goals in Serie A last term and has also established himself in the national team.