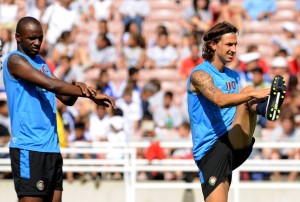 Interesting news is out and it has been reported that English Premier League side Chelsea FC wants Inter Milan midfielder Patrick Vieira.

However it was said that this is only possible if an appeal against their transfer ban is successful.

Manager Carlo Ancelotti sees Vieira as a perfect replacement for Michael Essien and John Obi Mikel when the pair go to the African Nations in January.

As it stands now, the Blues cannot sign players for the next two transfer windows after the Gael Kakuta saga.

And it is believed that Chelsea face competition from Vieira’s old club Arsenal.