Chelsea Will Not Lodge Official Complaint Against Manchester City,Yet 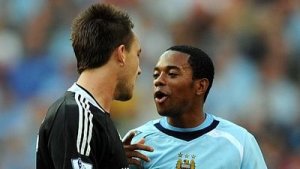 Interesting news are out and it has been reported that Chelsea FC have not reported Manchester City to the Premier League for tapping up defender John Terry.

It was reported recently that the Blues now under Carlo Ancelotti had made an official complaint following Manchester City’s public pursuit of the England skipper.

But it appears the FA Cup holders are biding their time before sending a dossier to the powers that be and in the meantime, City boss Mark Hughes is happy to continue his bid to lure Terry to Eastlands.

Hughes recently told reporters that it was well documented that Manchester City put in a £30million bid for John Terry and that was rejected by Chelsea FC.

Hughes also added that Terry is a player that he knows and that he had played alongside him at Chelsea and admire him as a person and captain from afar.

Hughes also said that Terry is obviously the type and calibre of player Manchester City needs if the club is going to progress and compete at the top level.

Hughes also went on to say that Chelsea have come out very strongly, in no uncertain terms, saying that John Terry is not available, and now the club have to reflect that position because John is very much a Chelsea player.

Hughes ended by saying that Manchester City need to address the defensive strength of the team and that he will look at all options.