Reports are out claiming that Chelsea goalkeeper Petr Cech is set to complete his long-awaited move to Arsenal this week. 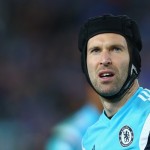 The Daily Mail suggests that the 33-year old Czech Republic international will put pen to a three-year deal for a transfer fee of £11million sometime in the next few days.

Cech has been linked with a Stamford Bridge departure for the past few months as it became apparent that he was not keen on his role as back-up to Thibaut Courtois.

Arsene Wenger has been in the hunt for a quality custodian after the drop-off in form of Wojciech Szczesny and the remaining doubts over David Ospina and it appears as though he is set to land his man.

It is believed that Cech will earn around £100,000-a-week with the Gunners who are hoping to complete the deal as soon as possible.