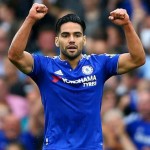 Jiangsu completed a record-breaking £25million deal for Blues midfielder Ramires this week and have now set their sights on Falcao, who is on loan at Stamford Bridge form Monaco.

According to Deportes RCN, the Chinese outfit are prepared to pay part of Falcao’s £265,000-a-week wages in order to lure him to Jiangsu.

That would be an acceptable scenario for Monaco who have loaned him to Manchester United and Chelsea over the past two seasons in order to get some of his earnings off their books.

Falcao has struggled in West London this season, having been restricted to nine Premier League appearances, and could still leave the reigning English champions before Monday’s transfer deadline.