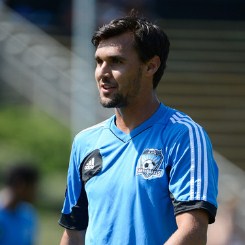 USA national team boss Jurgen Klinsmann is likely to call some MLS players into his squad early next week and Chris Wondolowski is hoping he is one of them.

Klinsmann named a 16-man squad made up of players from outside the US during the week and is expected to bring in some local players after this weekend’s league matches.

San Jose Earthquakes star Wondolowski has netted 11 goals in 11 appearances so far this term and could very well be a part of the roster which takes on Scotland, Brazil and Canada in friendlies prior to 2014 World Cup qualifiers against Antigua & Barbuda and Guatemala in June.

“I’m just trying to keep my fingers crossed and see what happens. It would be something special.”


Beckham On Team GB : I Don’t Want To Be Selected For Shirt Sales!