Claude Makelele Set To Retire At The End Of The Season 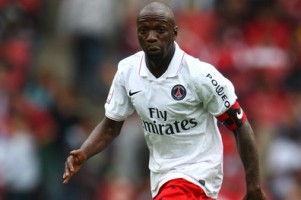 Paris St Germain captain Claude Makelele has revealed plans to retire at the end of the season.

The former Real Madrid and Chelsea midfielder has been an almost ever-present this campaign, taking part in all but three of PSG’s Ligue 1 matches.

At the age of 37, Makelele is said to be ready to hang up his boots, although he admitted that he could change his mind in the summer.

Makelele told reporters that this is his last season and that his future is behind him.

He then said that today it is his last season, but that could change tomorrow.

Makelele moved to PSG in the summer of 2008, following five successful years at Chelsea.

The former France international lifted two Premier League trophies, two League Cups and the FA Cup during his time in England, and has also won league titles in France and Spain as well as the 2002 Champions League with Real.

However, Makelele has a history of going back on decisions, having come out of international retirement twice before definitively quitting Les Bleus following the Euro 2008 finals.


Sergio Ramos : I Would Choose Jesus Navas Over Franck Ribery