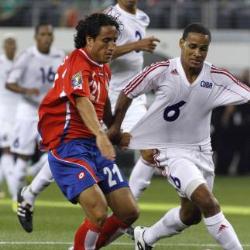 Costa Rica got the Gold Cup off to a goal-filled start on Sunday by hammering Cuba 5-0 at Cowboy Stadium with striker Marco Urena scoring twice.

Urena, in for the injured Bryan Ruiz in the Costa Rica attack, opening the scoring in the Group A encounter in the seventh minute with a smart, close range finish at the near post after good work down the left from Christian Bolanos.

Cuba went close to an equaliser just moments later when Alain Cervantes found Albert Gomez with a delightful pass but the striker lifted his shot over the bar.

That was the last chance of any real note from the Cubans, who, playing on the unfamiliar artificial surface, were outclassed by a Costa Rica side coached by the experienced Argentine Ricardo La Volpe.