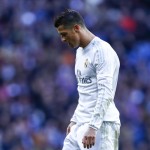 Reports have emerged claiming that Cristiano Ronaldo slammed the quality of his Real Madrid teammates after defeat at home to Atletico Madrid.

The result means Zinedine Zidane’s side are now nine points behind the Catalans who also have a game in hand, arguably ending their title aspirations.

However, Ronaldo suggested that would not be the case if his teammates possessed the talent he has.

“We had more chances than them and deserved to win,” he said. “We know that the situation is difficult but we have to continue.

“I like to play with Karim, Bale, Marcelo. I’m not saying the others aren’t good players. For example, Danilo was the best player on the pitch today.

“If everyone was at my level, maybe we would be leaders.”

Ronaldo then launched an astonishing attack at the press, insinuating they have downplayed the standard of his performances this season.

“For all you guys [reporters] it seems I am s***, if I listen to what the press say,” he added. “The statistics are there.”