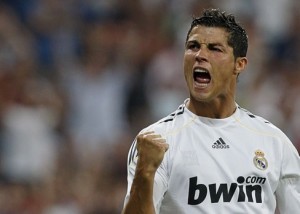 Interesting news is out and it has been reported that World football superstar Cristiano Ronaldo has made Real Madrid history by becoming the first player to score in his four league games for the club.

The Portuguese international winger, who joined the Spanish giants from Manchester United this summer in a world record £80million move, netted in the 2-0 win over Villarreal last night.

Ronaldo struck early after a brilliant turn on the halfway line saw him race towards the penalty area, step inside two defenders and drill a low 20-yard shot home.

Kaka slotted home a second-half penalty, his first for the club, to seal Madrid’s fourth successive win of the season and pull them level with league leaders Barcelona.