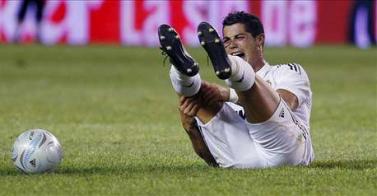 World football superstar Cristiano Ronaldo has had his legs insured for £90 million by his club Real Madrid.

The Spanish giants recently paid Manchester United a world record £80m fee for the reigning FIFA world player of the year, and they are taking no chances in protecting their investment.

The 24-year-old Portuguese international has received plenty of attention from defenders in his three pre-season appearances for his new club, suffering 34 fouls in a friendly match at League of Ireland side Shamrock Rovers and against Liga de Quito and Juventus in the Peace Cup.

Meanwhile, Ronaldo has finally sold the house he lived in while at United to Manchester City and Togo international striker Emmanuel Adebayor.

Ronaldo , who only moved in to the seven-bedroom house in February, is in line for a £1.65m profit from the sale.