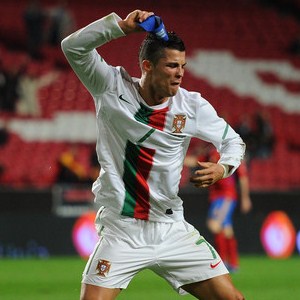 A fired-up Ronaldo cut inside Gerard Pique before scooping a shot over Madrid team-mate Casillas.

The sensational effort was going in but Manchester United Nani headed the ball over the line from point-blank range and the goal was ruled out for offside.

Ronaldo was far from pleased, throwing his captain’s armband to the floor. Portugal however went on to win the match 4-0 and Ronaldo was not on the score sheet.