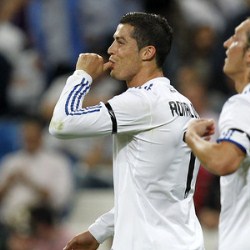 Portugal is counting on Cristiano Ronaldo to maintain his prolific scoring run when they meet Norway on Saturday in their Euro 2012 qualifier.

Coach Paulo Bento has engineered a remarkable turnaround, improving the side’s morale after replacing the sacked Carlos Queiroz in September and is heavily relying on Ronaldo to deliver.

Bento told a news conference : “It is a key opportunity to go first in the group,” .

“We are under pressure but it is a much better kind of pressure than what we had back in October.”

Ronaldo has been on fire at Real Madrid this season, netting 40 goals to set a La Liga record, and the Portugal captain revealed that he had one last job to do before going on holiday.

“The season is not over yet. I have an important game to play for Portugal and I want to win it,” he said.

Is FC Barcelona The ‘Dirtiest’ Team In The World? Vote Now!