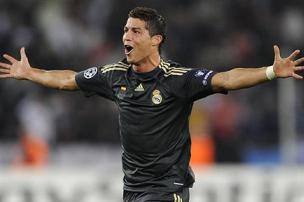 According to newspaper reports, the former Manchester United winger is to be offered a staggering £1.5 million a game to take part in a series of friendlies in the Middle East.

That would see the current world footballer of the year take over from David Beckham as the planet’s richest player and send him on his way to becoming the game’s first billionaire.

It is now believed that Real Madrid are considering a tour of the Middle East with oil barons are prepared to shell out megabucks to lure the Spanish club and main attraction Cristiano Ronaldo to Uzbekistan, Saudi Arabia, United Arab Emirates and Qatar.

It is also said that Real Madrid will be offered £3m per game for the tour during Spain’s annual winter break, with that amount to be split 50-50 with Ronaldo to ensure the Portuguese is included in the trip.

Ronaldo, bought by Real Madrid in the summer for £80m, already earns £12m a year at the Bernabeu, while pocketing a small fortune from a number of endorsement deals and his three clothing boutiques.