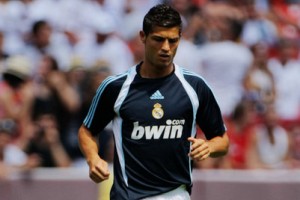 Cristiano Ronaldo, is a Portuguese footballer who plays as a forward for Spanish club Real Madrid and serves as captain of the Portuguese national team.

Ronaldo currently holds the distinction of being the most expensive player in football history after having transferred to Real Madrid from Manchester United in a deal worth £80 million (€94m, US$132m).

His contract with Real Madrid is believed to have made him the highest-paid football player in the world.

Ronaldo made his Madrid debut on 21 July in a 1–0 win over Shamrock Rovers. His first goal came one week later on a penalty in Madrid’s 4–2 LDU Quito.

On 29 August, Ronaldo capped his La Liga debut with a goal, scoring Real’s second from the penalty spot in a 3–2 home win against Deportivo La Coruña.

On 15 September, Ronaldo scored his first Champions League goals, both on free kicks, against Zürich in a 5–2 win.

He broke a Madrid club record when he scored in a league match against Villarreal and thus became the first ever player to score in his first four La Liga appearances.