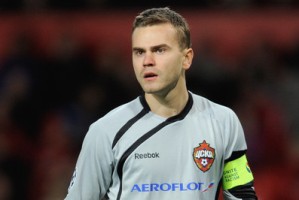 Local newspapers have reported that Akinfeev will be offered a new contract by CSKA Moscow in a bid to ensure they don’t lose him for nothing.

The Russia international is seen by Manchester United as a successor to Edwin van der Sar and his current deal with CSKA runs out in December next year.

However CSKA are determined not to let him leave cheaply and are expected to offer an extension through to 2014.