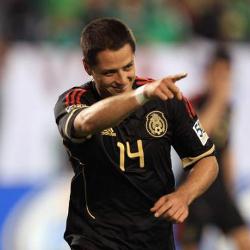 Mexico who have been hit by a massive ban to at least 5 of their senior players overcame adversity to thump Cuba 5-0 at the Bank of America Stadium, Charlotte, Costa Rica.

A brace from Manchester United striker Javier Hernandez and Giovani dos Santos and another from Jesús De Nigris gave the Mexicans a convincing win despite missing most of their senior players.

The match was played in good spirits in which there were no yellow or red card shown to both set of players.