David Beckham Fights With Another Fan 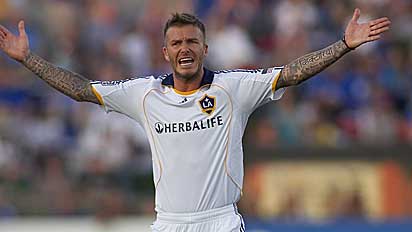 Sensational football news are out and it has been reported that England superstar David Beckham has clashed with another fan just one week after his ugly confrontation with spectators during his first home match for the Los Angeles Galaxy against AC Milan.

The latest incident saw the 34-year-old midfielder exchange words with a male in the crowd, who was wearing an England shirt, during the Galaxy’s 1-1 draw with the Kansas City Wizards on Saturday.

David Beckham appeared to take offence at something the man said, and later claimed the spectator had insulted his wife, Spice girl, Victoria.

Beckham said that the fan shouldn’t actually be wearing that shirt because what he was saying about Beckham’s wife was a disgrace.

The former England captain was on Friday fined $1000 by Major League Soccer over his earlier confrontation with fans when he climbed the railing and called a fan out.

Beckham had received a less than friendly welcome at his first home game after returning from a five-month loan spell at AC Milan the team the Galaxy were playing.