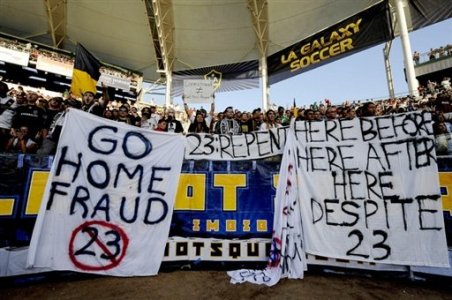 Football superstar David Beckham was punished with a 1,000 dollar fine for provoking his own team’s fans during the Galaxy’s 2-2 draw with AC Milan at the Home Depot Center.

Major League Soccer commissioner Don Garber fined the Los Angeles Galaxy’s midfielder for his part in an ugly halftime incident where he allegedly challenged an abusive Los Angeles fan to come down onto the field and confront him.

Garber told in a press conference that the MLS support its players interacting with fans, whether it is at clinics, charity events or by high-fiving their supporters in the stands while celebrating a goal but added that players should never engage in conduct that can be interpreted as encouraging fans to come out of the stands and onto the field, regardless of the reason.

Video footage of the incident of the July 19 exhibition game also clearly shows David Beckham trying to climb over a sideline railing before being stopped by security guards.

Police arrested a fan who left the stands to meet Beckham’s alleged challenge.

Beckham has incurred the wrath of Galaxy fans who say he is overpaid and refer to him as a part-time player because of his side trips to Europe to play for other teams.