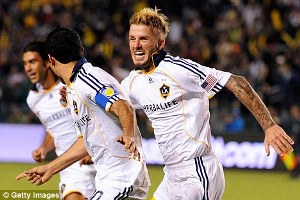 World soccer superstar David Beckham is struggling to be fit for his New Year move to AC Milan after suffering more shootout misery.

Beckham’s bid to win his first trophy with LA Galaxy ended in disappointment when they were beaten on penalties in the MLS Cup Final by Real Salt Lake.

Beckham was also clearly seen to be unable to walk following the sudden-death defeat on the artificial pitch at Seattle’s Qwest Field.

It was revealed that Beckham, now age 34, needed three cortisone injections into his damaged right ankle before Sunday night’s match.

Beckham later told reporters that ha has had problems with bone bruising for a few weeks and the only cure is to get as much rest as possible.

He also added that he has just over a month before joining AC Milan on loan for the start of training after their mid-winter break and Beckham hopes to be all right by then.

Beckham also said that he will just have to wait and see how the injury mends itself.