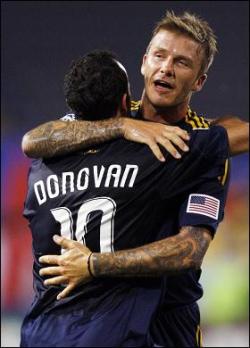 World football superstar David Beckham celebrates his LA Galaxy comeback with team-mate Landon Donovan to show that their feud is over.

It was widely reported that the pair fell out when Donovan slammed Beckham’s captaincy and his lack of commitment to the MLS and club LA Galaxy. This was of the superstar’s decision to join AC Milan on loan last season.

Donovan apologised to Beckham and it seemed all was forgiven as the pair hugged each other after the American scored in Galaxy’s 3-1 MLS win over New York Red Bulls.

Becks, who played 70 minutes in the 29C (84F) heat before being subbed, said to reporters that getting the victory was all that mattered.

Many in the paltry 23,238 crowd were not quite so forgiving as they booed Becks.

But the England star took it in his stride and said that he had a lot more boos before in games. A few here, but it’s to be expected.

He also added that it is nice to get booed sometimes as it can give you some inspiration.


Wenger To Deploy Walcott As Striker Next Season