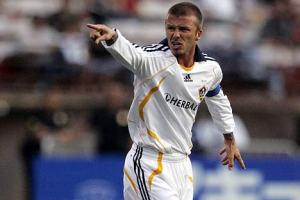 LA Galaxy star midfielder David Beckham has said that he is now happy that the fans have come around and have stopped booing and jeering him.

The England international midfielder has been the subject of many taunts from Galaxy fans, especially supporters group the LA Riot Squad, who were most unwelcoming when Beckham returned from a loan spell with Italian club AC Milan.

But after Beckham helped the Galaxy to the top of the Western Conference table and into the MLS play-offs, the fans have suddenly smartened up and realized the ex-Manchester United and Real Madrid midfielder is actually a fairly handy player.

Beckham said he was happy the crowd were treating him well after some bad patches when he first came back from Milan.

He told reporters that the crowd reaction has been good in the last couple of weeks or a month.

He also said that it has been up and down this season but it did not bother him as he has seen it all before.

However Beckham said that it is a bit different to be booed by your own fans.

Beckham said that he would much prefer it this way than what it was a few months back.