David Beckham : I Am Not Guaranteed To Go To South Africa 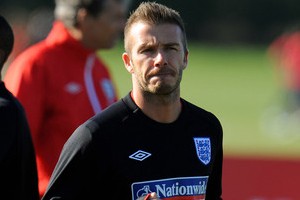 His cameo role for AC Milan in the 4-0 defeat by Manchester United at Old Trafford last week was watched by Fabio Capello, the England coach.

But Beckham, on-loan from LA Galaxy, said: “I’m not guaranteed to go to South Africa, not at all. I have to keep working hard and hopefully that will be enough to win a place.

“There are a few months left yet before the squad is announced and hopefully I can carry on playing well.

“But at the moment I am certainly not banking on being there.”