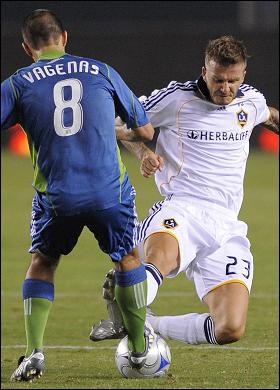 World soccer superstar David Beckham’s LA Galaxy career slumped to a new low last night when he was shown the red in a match against Seattle Sounders.

The England international midfielder was given his marching orders in the 17th minute for a reckless studs-up challenge on Peter Vagenas and that 34-year-old was booed off the pitch by fans and, to make matters worse, Galaxy went on to lose the game 2-0.

After the match, Beckham was quick to insist he had no intention of hurting Sounders midfielder Vagenas and added that Pete is one of my best friends.

He also said that he believes that it is a hard tackle but not with means for a red card.

Beckham also added that he has never gone in for a single tackle wanting to hurt someone but the referee saw it differently.

Esteban Cambiasso Out With Knee Injury