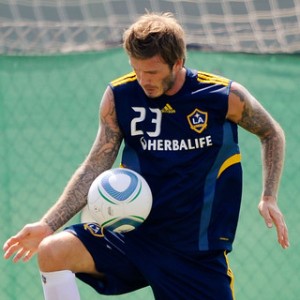 The 35-year old England international midfielder has been out of action since March with a ruptured Achilles tendon which he sustained whilst on loan with Italian giants AC Milan and is on the verge of a comeback.

Beckham was originally set for an October return but his training has picked up and he will almost certainly be back to take on Columbus Crew in some capacity much to the delight of his teammates and coach.

“It’s given us a boost,” defender Todd Dunivant said. “Anytime you can add someone like David Beckham to their team at this stage of the season is going to be a big plus for you.”

Head coach Bruce Arena added: “Having a player of that quality around is huge. It makes a difference. Therefore, that’s why we’re hopeful we get him to a point where he can get on the field and help us this year.”

The Galaxy currently sit on top of the Western Conference table with the equal best record in MLS just six games out from play-offs.