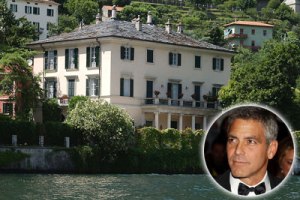 World soccer superstar David Beckham is in negotiations to purchase a countryside villa worth close to $40million.

The Villa Oleandra, owned by movie star George Clooney, is just 39 miles from Milan, where Beckham is on loan with Serie A giants AC.

It has been reported that negotiations are in advanced stages and Beckham has identified the area as perfect for his family.

It is reported that Beckham said “I have fallen in love with the beautiful countryside. It’s peaceful, quiet and near Milan. It would be great for the family,”

The villa is situated in Laglio, a small municipality near Lake Como in the north of Italy, and mayor Roberto Pozzi hopes if Clooney happens to leave that a star like Beckham takes his place.

Pozzi was quoted saying that “It would be a shame if George went because he has become one of the locals and we have grown fond of him. Everyone has seen him when he comes over and he is always friendly,”

He also said that “I know the Beckhams stayed at the villa last spring but I never saw them – if George does leave then I hope the Beckhams do but the place as it will keep a touch of glamour in Laglio.”