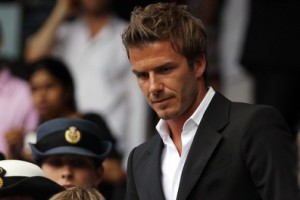 World soccer superstar David Beckham has revealed that he wants to play in the 2012 London Olympics which may be his last hurrah before retiring.

The former Manchester United and Real Madrid midfielder, who is still recovering from a seriously injured Achilles, is keen on representing the Great Britain football team at his home Games despite the fact he’ll then be 37.

The LA Galaxy star also stated he would like to play in the 2014 World Cup in Brazil.