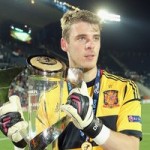 It has been reported that David de Gea is hoping that Manchester United will be successful in their swoop for Barcelona midfielder Cesc Fabregas.

The Spanish international goalkeeper believes the former Arsenal captain Fabregas would make a big impact back in the Premier League.

De Gea said: “Fabregas has to make a decision to stay or come to us. He would be a great signing, and would help us to improve.”

Manchester United have been unsuccessful in their two previous bid for the Spanish international and it remains to be seen whether the Premier League champions would lodge a third bid.

AS Roma To Beat Arsenal For Barcelona Starlet Toni Sanabria