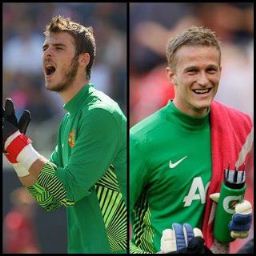 Manchester United fans all around the world are clearly disappointed with the performance of goalkeeper David de Gea.

Nobody said replacing the great Edwin van Der Sar would be easy and the young Spaniard is experiencing it first hand.

United’s other goalkeeper, 27 year old Anders Lindegaard is also experiencing mixed fortune trying to be the goalkeeper for one of the biggest football team in the world.

Red Devils manager Sir Alex Ferguson has always defended De Gea and Lindegaard has somewhat shown that he is worthy of a starting spot for the reigning Premier League champions.

Who do you think should be the No.1 goalkeeper for Manchester United? Vote now and let us know what you think. You can also leave your opinions in the comments section below. Cheers!