David Villa Back On The Transfer Market 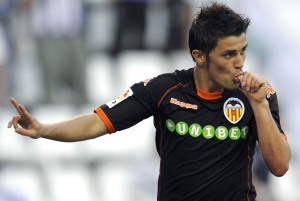 Premier League giants Liverpool and Manchester United are on red alert after David Villa fired his agent for failing to get him a summer move.

It is now believed that the Spanish international striker has lost patience with his agents, Jose Luis Tamargo.

David Villa’s club Valencia CF are currently in huge debt and may be forced to sell their star in January if a substantial bid comes along.