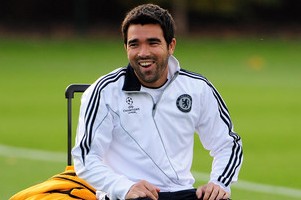 Chelsea midfielder Deco is eyeing a return to his native Brazil after this summer’s World Cup.

The 32-year old, who represents Portugal after gaining citizenship in 2002, was born in Brazil and hopes he can finish his playing career in his homeland.

He added that ideally he would like to go after the World Cup and he has been talking to Chelsea about it.

Deco also said that it will all depend on Chelsea, if the club decides release him or let him go on loan.