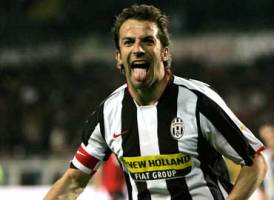 Football news from Italy is out and it has been reported that veteran striker Alessandro del Piero has signed a new contract with Italian giants Juventus.

Italian international Del Piero’s previous contract was due to expire at the end of next season but he is now tied to the Bianconeri until June 2011.

The 34-year-old expressed his delight by saying that he is very happy to remain with Juventus for the next two years. He also added that he is proud of this contract extension,as it gives him great satisfaction. He also said that it is with Juventus where he have played at the highest level.

Del Piero also said that the negotiations were very quick and that he would give everything to pay back the trust handed to him by the club. The World Cup-winning striker made his Serie A debut with Juve in 1993 and has been there ever since.

Del Piero scored 13 goals in 31 league appearances for Juve last season and the striker said that he wants to play football for as long as he can guarantee his quality.

He also ended by saying that his relationship with the club goes beyond the professional scene.