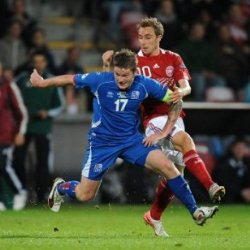 Host nation Denmark were eliminated in the group stages of the European Under-21 Championship following a dramatic 3-1 defeat at the hands of Iceland in Aalborg.

Though Belarus, who also started the day on three points, were defeated by Switzerland, Denmark’s unexpected loss means Keld Bordinggaard’s side suffered acute disappointment in front of their home supporters, and an early exit.

After Iceland manager Eyjolfur Sverrisson had been sent to the stands for comments made to officials, his side struck twice in two second-half minutes as Kolbeinn Sigthorsson and Birkir Bjarnason silenced the home crowd.