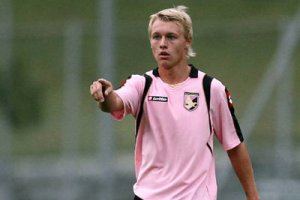 It looks like Manchester City’s spending spree is not going to slow down as it has been reported that the club is tracking Palermo defender Simon Kjaer.

Local Italian newspapers have reported that Manchester City had scouts in the stands to watch Kjaer in action against Juventus last week.

The Denmark international defender recently admitted that he would jump at the chance of play for Manchester United.

Real Madrid tried to sign Simon Kjaer in August 2007, but the offer was refused by his former club FC Midtjylland and in February 2008 he signed a five-year contract with Serie A team Palermo, which took effect in July 2008.

His excellent performances ensured him more first team football, and also interest from major Serie A teams and a call-up for the senior Danish national football team on February 2009.