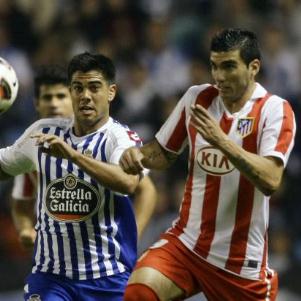 Sergio Aguero left it later than Atletico Madrid may have hoped, but he struck a crucial late winner in a 1-0 victory over struggling Deportivo La Coruna to rocket his side into the Europa League places.

The game looked to drifting towards a drab stalemate until the Argentina international pounced in the 80th minute, taking Juanfran’s touch to net his 17th goal of the Primera League season.

As a result, Atletico are now fifth in the table, while their hosts, who lost Alberto Lopo to an 11th red card of his career, remain just three points above the drop zone.