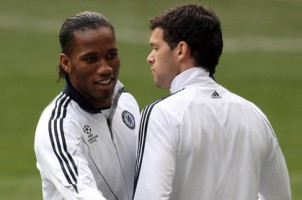 Didier Drogba is facing another lengthy ban after his dismissal in Chelsea’s defeat to Inter Milan last night.

The Ivory Coast striker’s four-match ban for ranting at ref Tom Henning Ovrebo as Chelsea crashed out in the semi-finals to Barcelona 12 months ago also carried a two-match suspended penalty, which could be triggered by Uefa after his sending-off for violent conduct.

A straight red card in the Champions League carries an automatic two-game suspension so Drogba could begin next season’s competition with a four-match ban, just as he did during this campaign.

Chelsea considered selling Drogba after his antics in Moscow and those at Stamford Bridge last year, but are expected to stand by him this time around, not least because he signed a new three-year contract last summer.