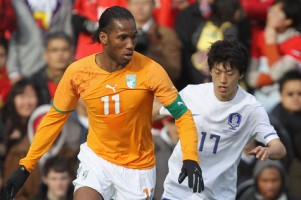 Chelsea ace Didier Drogba has been named African Footballer of the Year.

The Ivory Coast striker was handed his award in a ceremony in Accra, as he was voted the continent’s top player for 2009.

It is the second time in his career the 32-year-old has won the honour, with the previous success coming in 2006.


Nemanja Vidic Happy To Have Rooney In Manchester United